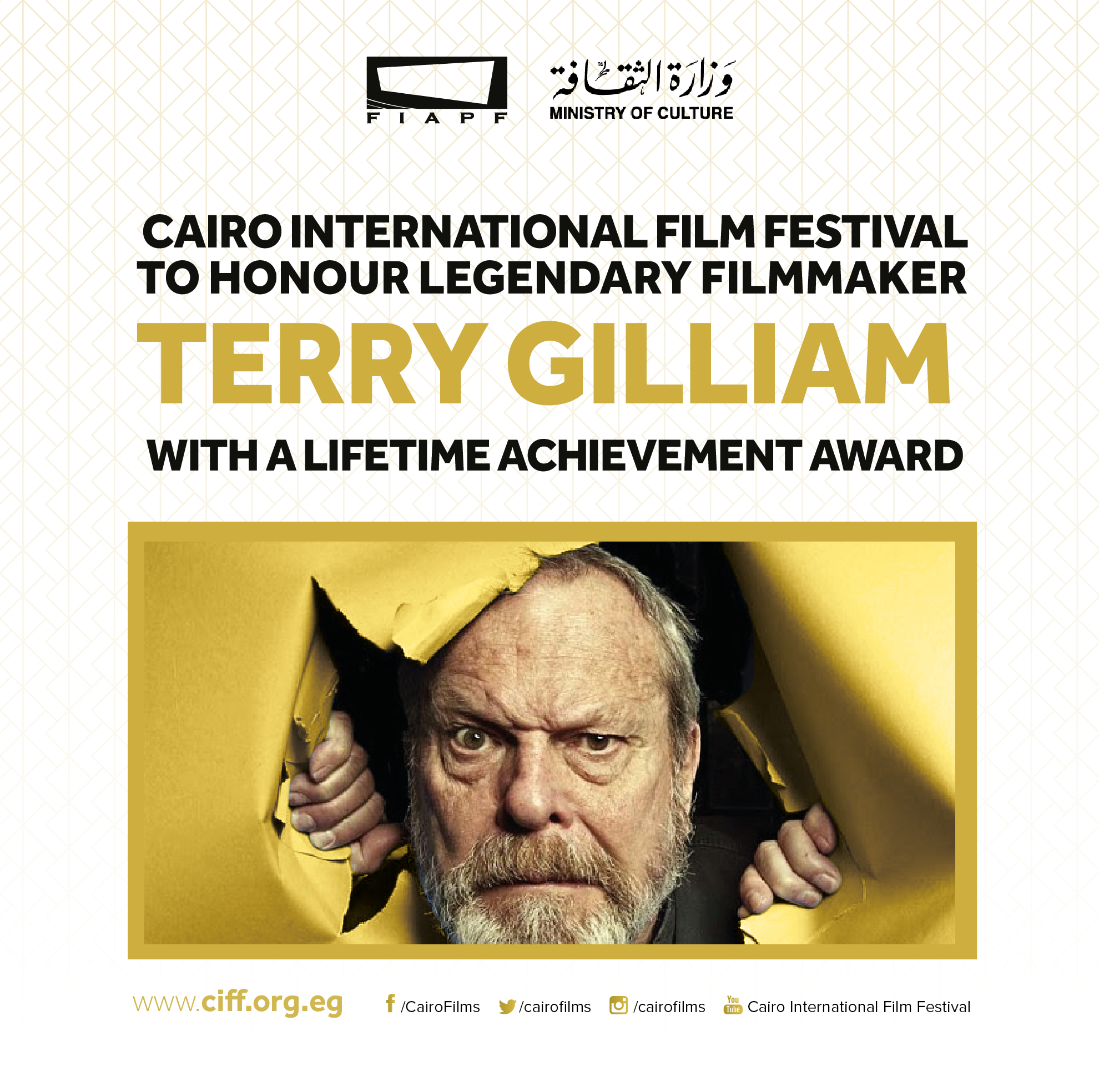 The visionary and iconic director, screenwriter, actor and animator, Terry Gilliam will be honoured with a Lifetime Achievement Award at the 41st edition of the Cairo International Film Festival (CIFF) which runs from 20-29 November, 2019. In recognition of his career, which spans four decades, and outstanding contributions to the film industry, marking him as one of the greatest filmmakers of our time, Gilliam is set to accept the accolade during the opening ceremony of the Festival at The Cairo Opera House.

In conjunction with the prestigious award, fans and industry members alike will also have a once-in-a-lifetime chance to hear the Oscar® nominated and BAFTA Fellowship director’s remarkable story with an in-conversation event at the Cairo Opera House. This rare event provides an unmissable opportunity for audiences to gain an insight into Gilliam’s life, career and achievements, with an exclusive question and answer session for audience members. The Festival will also host special screenings of Brazil (1985) and The Man Who Killed Don Quixote (2018).

Terry Gilliam first gained recognition when he made his mark on pop culture as a founding member of the Monty Python comedy troupe and with his animations for Monty Python’s Flying Circus, which first aired on television in the U.K. in 1969. His unique flair and remarkable imagination in storytelling soon propelled him into the director’s chair for Monty Python and the Holy Grail (1975) and segments of Monty Python’s The Meaning of Life (1983) alongside Terry Jones.

Gilliam’s first outing as a solo director was the captivating and dazzling Jabberwocky (1977) which he also co-wrote. He followed on with the hugely successful Time Bandits (1981), an intoxicating time travel fantasy starring John Cleese and Sean Connery. In 1985 he went onto write and direct the remarkable sci-fi picture Brazil (1985), wowing critics who hailed it a visual masterpiece and scored Gilliam an Oscar® nomination.

Gilliam’s trademark imagination was on full display in his flamboyant fantasy The Adventures of Baron Munchausen (1989). In 1991, Gilliam cemented his reputation as a successful director of actors with The Fisher King starring Jeff Bridges, Robin Williams and Mercedes Ruehl, which received critical acclaim and performed well at the Oscars® and Golden Globe Awards®. Highly regarded as one of the greatest

science fiction films ever made, 12 Monkeys hit screens in 1996 with excellent performances from Bruce Willis and Brad Pitt, who won a Golden Globe Award® and Oscar® nomination for Best Supporting Actor.

Gilliam’s next film whisked audiences away on a fantastical adventure in The Brothers Grimm (2005) starring Matt Damon and Heath Ledger.  Returning to independent filmmaking, Gilliam directed and co-wrote Tideland (2005) before delivering the intoxicatingly imaginative The Imaginarium of Doctor Parnassus (2009), re-confirming Gilliam’s status as a conjurer of cinema and featuring a final performance from the late, gifted Heath Ledger.

Bursting with the filmmaker’s trademark deep-focus detail, Gilliam directed The Zero Theorem (2014), a spellbinding sci-fi epic featuring a captivating performance by two-time Oscar® winner Christoph Waltz. Finally, after three decades, Gilliam’s long-dreamed-of project, adventure-comedy The Man Who Killed Don Quixote, came to light. Gilliam also co-wrote the project with Tony Grisoni, which stars Adam Driver and Jonathan Pryce. From the unique worlds of Brazil to Twelve Monkeys, this prolific filmmaker’s body of work confirms what a dreary place the world would be without the magic of Terry Gilliam.

Terry Gilliam said: “It’s a great honour to be recognised with this award by the Cairo International Film Festival, I am very excited to be visiting Egypt in November to meet with audiences and filmmakers to celebrate storytelling.”

CIFF’s President Moh Hefzy commented: “Terry Gilliam is a genius filmmaker, a maverick who has an extraordinary gift for storytelling. His films are wildly imaginative and sublime, submerging audiences into dizzying dystopias and whimsical fairytales; he is undoubtedly one of the true greats of cinema. His remarkable, visionary body of work, which spans over 40 years, has seen him craft some of the most unique, epic and captivating films ever made. We are honoured to present Terry Gilliam with a Lifetime Achievement Award and we look forward to welcoming him to Cairo.”