by Mohamed Khaled
/
97 Views
No Comments 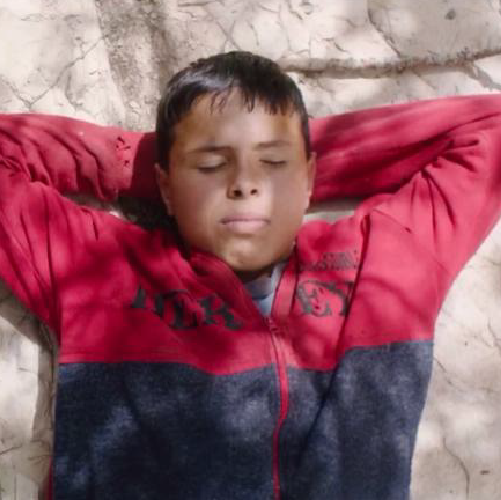 Mghila Mountain, an extremely poor and isolated region in the northwest of Tunisia. November 2015.
When terrorists attack two young shepherds and decapitate one of them, 13-year-old Achraf is forced to bring the severed head of his cousin Nizar to the family as a gruesome message.
Traumatised and trying not to lose his mind, Achraf realizes that the ghost of his cousin is following him and seems determined to accompany him in his mourning.
But when confronted with the helplessness of his elders who have been abandoned by the authorities, Achraf is torn between his desire to hold on to Nizar for a little while longer and his duty to lead the men of the family into the mountains to help them retrieve the body and bury it with dignity.
Inspired by real events and deeply rooted in a ruthless social context, Red Path is a dreamlike journey into the wounded psyche of a child and his incredible ability to overcome trauma.

Theater and movie director Lotfi Achour has directed over 25 theater productions, including Macbeth: Leïla and Ben – A Bloody History created for the World Shakespeare Festival at the London Olympics.
He directed five short films selected by more than 250 festivals and have won over 90 awards, including Law of the Lamb selected for the Official Competition of the 2016 Cannes Film Festival, His last film Blind Spot won Best Short at the 2022 Cairo International Film Festival and Best Documentary at the 2022 Tampere Film Festival in Finland. Achour directed Burning Hope, multi-awarded feature film selected for official competition at the Carthage Film Festival and other festivals in the world.

His next feature film, Red Path, a co-production between Tunisia, France, Belgium, and Poland,. Red Path is currently in post-production.

Sébastien Hussenot founded La Luna Productions in 1994.
La Luna has produced over 90 films: shorts, documentaries, and features, screened worldwide and won over 600 awards, including an Oscar nomination in 2009 for the short film Manon on the Asphalt, directed by Elizabeth Marre and Olivier Pont, Recently, the Ghanaian film Tsutsué–written and directed by Amartei Armar and co-produced with the AKA Entertainment in Ghana entered the Official Competition of the 2022 Cannes Film Festival. America, a short film directed by Giacomo Abbruzzese, was nominated in 2022 for a César Award.
In recent years, Hussenot has focused on international co-productions with Tunisia, Lebanon, Italy, Iran, Ghana, among others, and in 2018, he was awarded for Best Producer at the Clermont Ferrand International Short Film Festival in France.

Beside two documentaries and short Web and TV formats, she produced Burning Hope by Lotfi Achour and all his multi-award short films :Father 2014 was selected by over 90 festivals, Law of the Lamb 2016 was screened at over 80 festivals, including in the Official Selection of the 2016 Cannes Film Festival, his recent short film Blind Spot 2021 is touring prestigious festivals

She also produced the short films The Rest is Work of Man by Doria Achour and Eagles of Carthage by Adriano Valerio, both selected at Venice Film Festival in 2016 and 2020. Anissa is currently developing a documentary feature film and two fiction feature films