by Mohamed Khaled
/
138 Views
No Comments 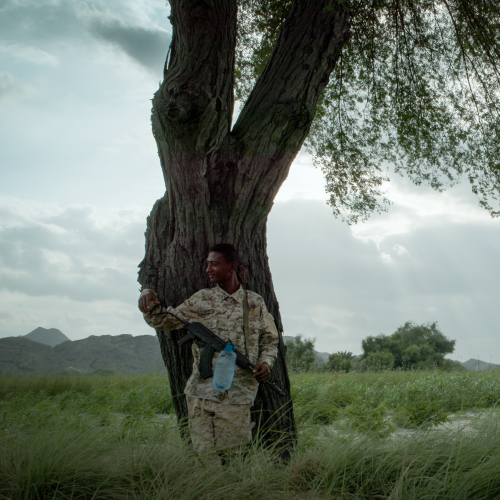 In a small Yemeni village we meet Nasser, a 16-year-old child soldier returning from war. His enrollment into the military is a rite of passage taken by his father and older brother before him. However, Nasser quickly understood that there was little to gain in joining the armed groups. The pay is low, the job is hazardous, and only a few people respect such work, so he decides to return home to find another way.

The war broke his father and brother and forced Nasser to become the guardian of his younger siblings’ fate. And while there are very few ways in which a young man in a war-torn economy can make a living, Nasser’s mission is to stop his two younger siblings from picking up arms. This reality film immerses us deep within Nasser’s journey to build a different life for himself and, in his own words, exposes the impact of war and the glorified myth of child soldiers in Yemen.

Mariam Al-Dhubhani is a Yemeni-Russian award-winning journalist, filmmaker, curator, and educator based in the MENA region. She first pursued her passion for media during the 2011 Arab uprisings and co-founded her first media production. She is a two-time TEDx speaker and one of the first directors to utilize virtual reality to highlight stories from Yemen. Al-Dhubhani counters viewpoints in the mainstream media’s stereotyping of the region to showcase equality in humanity.

Mohammed Al-Jaberi is a Yemeni producer and cinematographer who worked on award-winning short documentary films focusing on Yemen. His feature-length debut is a film showing the impact of the war in Yemen on children, produced in collaboration with DFI and AlJazeera. He holds degrees in international relations and development.