by Mohamed Khaled
/
124 Views
No Comments 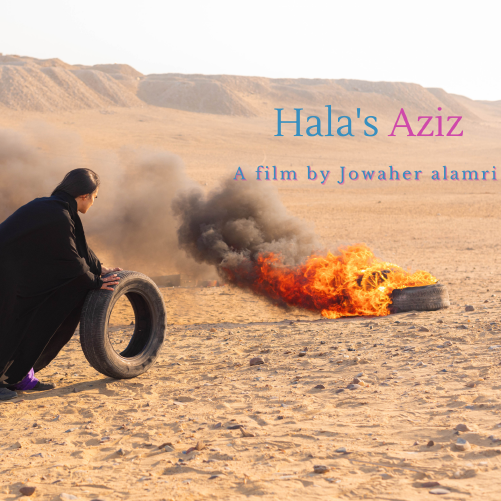 Set in Jubail Industrial City, married couple Hala and Aziz love one another, but their toxic love makes the relationship dysfunctional. They do not see the dysfunction, whereas their elder daughter Sara does. But when an ugly fight happens because Sara crosses boundaries, things start to flip. Aziz blames Hala‘s trusting nature and her way of raising Sara. Hala is shocked by both of them and tries her best to have a decent talk with Aziz, but this doesn’t work. Aziz is blinded by rage, and Hala is not aware that he doesn’t see her. Aziz shows his toxic side that was obscured from everyone and this frightens her.
Hala decides to sneak out with her daughters and goes to her friend Munira, who had asked to go on a road trip with her a day ago. Aziz, confused and shocked, goes to Munira’s house to convince Hala to return with him, but he fails. Aziz gives up and goes sailing, which leads to him being lost at sea.
Hala decides to go on the road trip, but it turns into a tragedy after a car accident leaves them lost in the desert. Being lost in the desert makes Hala feel like herself for the first time. Just when the group loses all hope, she finds a way to get a driver’s attention, who drives them to the hospital. Hala’s changes don’t allow Aziz to control her newly-freed spirit, which leads her to take the wheel for the first time. She tells Aziz that she will leave him.

Jawahar Alamri is a Saudi writer and director with a degree in cinematic arts from Effat University in Jeddah. She believes in the visual language of cinema as a contribution to self-actualization and recognition for the individual as well as for the collective. Films are also fun! She wants to entertain people and touch their hearts with raw emotions.

Alamri’s latest film as a writer/director is Gathering with Cosmos from the OMNIBUS feature that was funded by the Red Sea Film Festival Foundation in 2020 and officially selected for the Cairo International Film Festival in 2021. The film is now available on Shahid. She was also the writer and director of the short film Sadeya Left Sultan that participated in several film festivals. Alamri produced The Girls who Burned the Night, which won three prizes and participated in numerous international film festivals. Jowaher Alamri is an alumna of the 2021 Red Sea Lodge and the 2022 MEMI (Middle East Media Initiative). She also won the Shahid distribution prize in the Red Sea Film Festival Market in 2021 for her first feature film Hala’s Aziz.

A Valparaiso University Graduate, Mohammed Sendi is an award-winning Saudi filmmaker with 11 years of experience in directing and producing. His first documentary Valley of Paradise premiered at the Gulf Film Festival in 2009. He has produced award-winning films such as Eye & Mermaid that won Best Arab Short at the Abu Dhabi International Film Festival in 2014 and Winak? that won Best Arab Short at the 2012 Doha–Tribeca Film Festival. Sendi was an executive producer on a series of short films produced by Ithra, such as The Wedding Dress and Al Qatt. The films he helped make have traveled to cities and festivals such as Toronto, Berlin, Stockholm, Beirut, New York, and many more. Sendi gave various filmmaking workshops at various editions of the Saudi Film Festival, Hakaya Misk, and Colors of Saudi. He is currently producing the feature film Hala’s Aziz, a Red Sea Lodge 2021 Shahid Award recipient.